I always keep backpack ready just in case the opportunity arises to get away for a weekend in the High Sierra . . . so when the mountain gods provided an opening last weekend I grabbed my gear and headed for the backcountry.

It wasn't long before I found myself reciting the necessary regulations to the ranger, "six to eight inches, durable surfaces, bear canister, one hundred feet, carry out all trash". There was no need to speak in complete sentences, he knew that I knew the deal. The ranger hardly looked up while handing me a permit for the Cottonwood Pass trail out of Horseshoe Meadows.

I left the Cottonwood Pass trailhead at 1:00 pm on Friday and followed the familiar sandy trail toward the pass at 11,140 feet. After a few hours I joined the Pacific Crest Trail and headed north toward Crabtree Meadow.

Just before the Chicken Spring Lake I was surprised to meet a few PCT hikers. They were going southbound from Canada to Mexico and appeared to be well seasoned hikers. As we chatted one of them commented, "that's a small pack your carrying". I was traveling with one of my smallest homemade packs as part of a minimalist setup; only 12 pounds with gear, food and fuel for three days.

We talked for a while but I didn't linger too long, I wanted to make the 20 miles to Crabtree Meadow before dark. . .


I almost made it to Rock Creek before dark, but ended up having dinner by headlamp at around 8:00 pm. I hiked a short while in the dark after dinner and found a camp near the ranger station.

I wanted to keep it simple and only brought a Gossamer Gear Nightlight foam sleeping pad. The foam pad folds in thirds and doubles as the pack frame for my backpack. By combining the foam pad with my backpack for my legs and finding an area with soft pine duff I slept well throughout the night. . .


I crossed over a very low Rock Creek and headed up the 1,400 feet of switchbacks to Guyout Pass.

Once I made it over Guyout Pass it was almost all downhill to Crabtree Meadow.

From Crabtree Meadow I left the trail and took a cross country shortcut toward the Crabtree Lakes trail. I passed several use trails and cairns along the way then joined an 'official' trail at about 10,900 feet. I passed a horse packers camp and soon found myself at the first of the beautiful Crabtree Lakes.


There was a sandy beach on the north shore of Crabtree Lake #2. A perfect spot to soak my sore feet and make some dinner.


After dinner I headed up the cross country route toward the last Crabtree Lake. The glacially polished canyon made for easy cross country travel.


Once I reached Crabtree Lake #3 I got the first look at Crabtree Pass, the cross country pass I would be crossing the next morning. There is plenty of information on this pass online, but it looked steep from across the lake.


I followed a use trail above the north side of the lake and found a few sandy places to camp close to the water, but it was getting windy and they were exposed. I ended up finding a nice sandy spot higher up that was sheltered from the wind and the inevitable condensation that would come with sleeping closer to the water.

The photo below shows the eastern shoreline of Crabtree Lake #3. From this vantage point it is easier to see the actual angle of the chutes leading to Crabtree Pass. Although they look almost vertical from across the lake they are actually relatively easy as far as cross country passes go.


The next morning I got an early start and made it over Crabtree Pass just as the sun was hitting the lake. Instead of taking the more common route up one of the chutes I traversed along the granite benches to the north of the pass. There were cairns along the way and this seemed like a better alternative than the steeper routes up the loose scree chutes.


Once over Crabtree Pass I enjoyed a few hours strolling through Miter Basin. This is perfect cross country terrain, easy granite slabs with beautiful lakes and creeks along the way. . . and all down hill!

Due to the drought and late season conditions the water level was very low in Miter Basin.


I found a use trail that provided a very direct route across Miter Basin. At about 11,100 feet I crossed over to the opposite side and headed up toward Three Tree Tarn. From this small lake there is a chute that leads down to Lower Soldier Lake.


After taking a break on the shore of Lower Soldier Lake I got back on a 'real' trail and headed to New Army Pass. After spending a few days negotiating cross country it always feels easy to stroll along on a trail. Soon I was at the top of New Army Pass at 12,290 feet.


A quick video of the route down from New Army Pass:


After the final lake there is an old use trail through the boulders to the north of the waterfall that drains the South Fork Lakes. This first section can be tricky and I would not recommend it for anyone not comfortable with some class II scrambling. After the waterfall outlet the rest of the trail is easy and follows a few meadows and creek crossings before finally meeting back up with the main trail.


Just as the sun was setting I came across this old cabin next to the creek. These old cabins were built right on the dirt and since there was no real foundation the lower logs have slowly decomposed, leaving only this short cabin.


Once back on the main trail it wasn't long before I was on the road to Lone Pine for a cheeseburger. Smoke from the Rough Fire was visible on the drive down to the Owens Valley.


I tried to keep my gear simple for this trip. With all of my gear, food for three days, bear canister and 1 liter of water my pack weight just over 14 pounds on the first day. 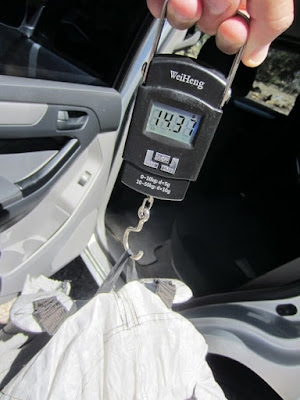 Andy D
I live at sea level but spend most days planning another adventure in the High Sierra. Here you will find trip reports and photos from my backpacking treks and info on creative lightweight gear.